X
Back to the top

Legend has it, that the Lived family had a very dark secret.

During the time the Liveds ran the old farm, 16 reported people went missing in a span of 3 years. Investigation never led to the farm. The Liveds themselves even had a daughter among those gone … unaccounted

It wasn’t until after the family picked up and moved on that people stopped disappearing. Soon after that, the shed was found.

Hidden well within the farm’s sprawling forest, the tiny red shed was revealed to be the gruesome location related to at least 14 of the missing people. No bodies were ever found. Well, none that were easily recognizable. DNA from blood, flesh, teeth, feces, and other human parts were used for verification. Those who managed to stomach even talking about the shed revealed little.

A wooden chair sat erect in the center of the shed, surrounded by shelves full of items used for various torture and killing methods. The chair itself, a device constructed to help aid in the sadism and madness.

The local authorities burned the shed to the ground.The locals started calling the place “BloodShed Farms”. None of the members of the Lived family were ever found.

Once long ago, this travelling fun house amused families and brought joy to the faces of all boys and girls. However, a tragic accident left its long time owners unable to tend to the attraction and the many performers who had made this their home were thrown to the streets. Years later, a new proprietor has reopened the amusement and looks to enliven the show and mesmerize audiences with a new cast of clowns. Where this new manager recruited his staff is unknown. Locals say some came from the local Asylum, some are original acts who lived as vagrants in the fun house during the years it was inoperable, and other rumors say members of the Lived family themselves may be among those performing in the attraction.

The Trail of Terror will take you on a journey full of unimaginable horrors and bone-chilling frights. You’ll visit Murter Manor which was once home to the murderous Lived family. The new residents are always looking for dinner guest, and you’ll never believe who’s on Ma’s menu! A winding path leads you through a corn maze path where you never know who or what will be waiting for you around every corner. You’ll walk through a huge dilapidated mine shaft, into a camper where the scene is that of pure horror, and then into the woods, where a group of cannibalistic outcast have made their home and they are anything but hospitable to outsiders. If you manage to emerge from the woods with some of your group, you’ll have to make your way through decapitated crypts and catacombs where something evil waits within! If you make it out of the crypt you’ll then have to survive a trip through the human chop shop, and hope you make it through with all your parts still intact.

In 1952, Hellsgate was originally intended to be used as a halfway house for those being released from the state’s mental institution, but once funding was cut, a private organization took control of the complex. As the site seemingly fell into ruin, those originally involved in the project moved on or assumed it was no longer in operation. However, those housed in the asylum were never released and the new attendants never left. What has transpired in these twisted halls is the work of pure evil. The criminally insane who reside here now are the subjects of sadistic and inhuman experiments. Even the employees have lost their grip on reality, and most of them have become just as deranged and maniacal as the crazies themselves. If you’re thinking of venturing into this nightmare, just remember you may not come out the same person.

It’s time to take a trip out to Necropolis Cemetery on one of the Columbus Casket Company’s funeral wagons. The normal road has washed out so the wagon will have to seek an alternate route. Unfortunately, this means traversing through treacherous territory  where trespassers and strangers are not welcomed at all by the locals .
The Last Ride: Haunted Hayride takes your traditional hayrides to an all new level! Its unique and interactive cart design and skilled actors immerse you in the experience from start to finish. Never been scared on a hayride before? That’s about to change!

ONLY AT BLOODSHED FARMS FEAR FEST!

Admittance into The Blood Shed is NOT part of the COMBO TICKET!

The Blood Shed is a separate experience and tickets for it must be purchased for $13 each.

Only ONE person will be admitted into Blood Shed at a time. The rest of the group will get to watch the victim (we mean customer) via night vision camera on a side monitor. This experience is not for the faint of heart.

The Camper is a 15 minute – interactive, escape room experience.

ONLY AT BLOODSHED FARMS FEAR FEST!

Admittance into The Camper is NOT part of the COMBO TICKET!

The Camper is a separate experience and tickets for it must be purchased for $10 per person each. Tickets are limited and time slots may be given.

For more info on “The Camper Escape Room” go HERE! 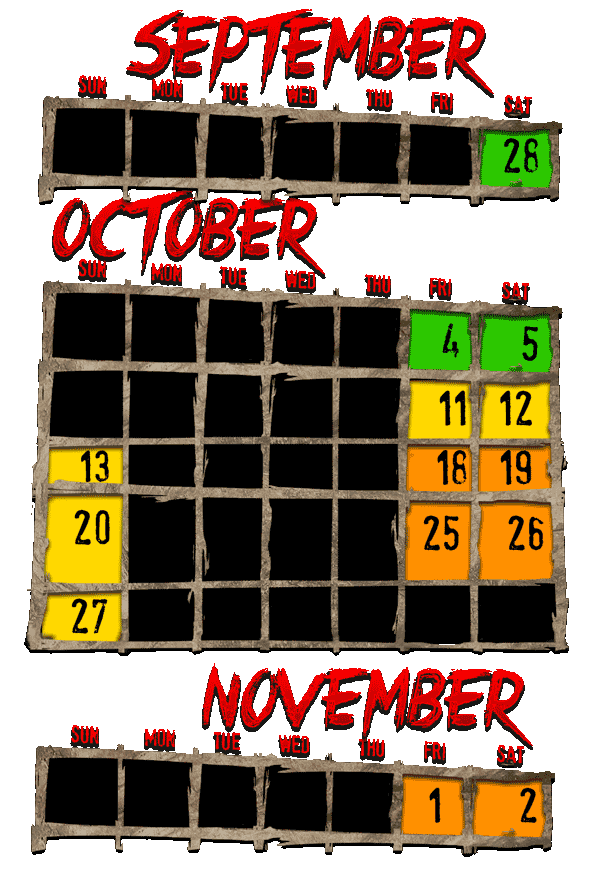 TICKETS PURCHASED ONLINE MUST STILL BE REDEEMED AT THE TICKET BOOTH!

WARNING: There are Absolutely NO REFUNDS for online ticket sales!

(Reapers Ball Admission IS included with the purchase of any Attraction, Combo Pass, or VIP Combo Pass.)

The Reapers Ball is the name of our central gathering area. This is the area you will access all 4 attractions from. There is much to do in between!

An all new Bootique Gift Shop, The Chamber (puzzle escape), 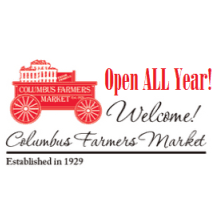 is located at the

Before you start screaming at BloodShed Farms, plan a trip to the Columbus Farmers Market. Open everyday we are!

Columbus Farmers Market Complex is the Delaware Valley’s oldest and largest Flea Market with 65 Inside Stores. You will find just about anything!  Fresh produce and seafood, excellent meats, delicious baked goods.  Household and decorative items, clothing and accessories.  Outdoor Flea Market with new and used merchandise.  Many great food vendors.  Flowers, plants and garden ornaments.  Columbus Antiques Mall is filled with antiques and collectibles.  Goodwill has a large variety of goods at discounted prices. American Sheds has an outstanding selection of sheds.  Store it all at our state-of-the-art Self Storage facility.  Stop by the new Central Jersey Equipment for the best in John Deere products.
Visit www.columbusfarmersmarket.com for more info!

FROM THE NEW JERSEY TURNPIKE: Take Exit 7 of the New Jersey Turnpike. Go south on Route 206 for 4 miles. The Market will be on your right.

FROM INTERSTATE ROUTE 295: Take Exit 52A off of Route 295. (you will see signs for Columbus Farmers Market) Continue 3 miles into the town of Columbus. Get on Route 206 South. ***** There is a tricky Left turn to get onto Route 206 South. Please pay attention to the signs just before town ***** Travel for 1 mile on Route 206 South. The Market will be on your right.

Attractions stay open until the last group goes through.

The attractions are NOT handicap accessible.

The attractions are NOT wheelchair or stroller accessible.

attraction. *It’s scary! We’re there to scare you!*

attractions. Attendance can vary too much for us to give you

even a close estimate.

A. We do not have an age recommendation because all children are different. It is up to the parent/guardian/person attending with child to know the child’s limitations and fears.

A. Each walking maze varies from 5 to 10 minutes each. The Hayride is about 20 minutes. So 35 to 50 minutes total. That said, we do NOT know how long line waits will be. It varies greatly night to night. Also, there are many other things to do and see so don’t rush in and rush out!

A. Not at this time but we are working on it. Send us an email if you have a date in mind.

A. If our attractions are closed due to inclement weather and It will be posted on this site by 4pm EST the day of. Otherwise, we are open.

There are some scenes where the actors may touch you. 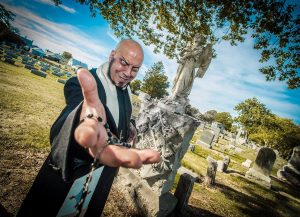